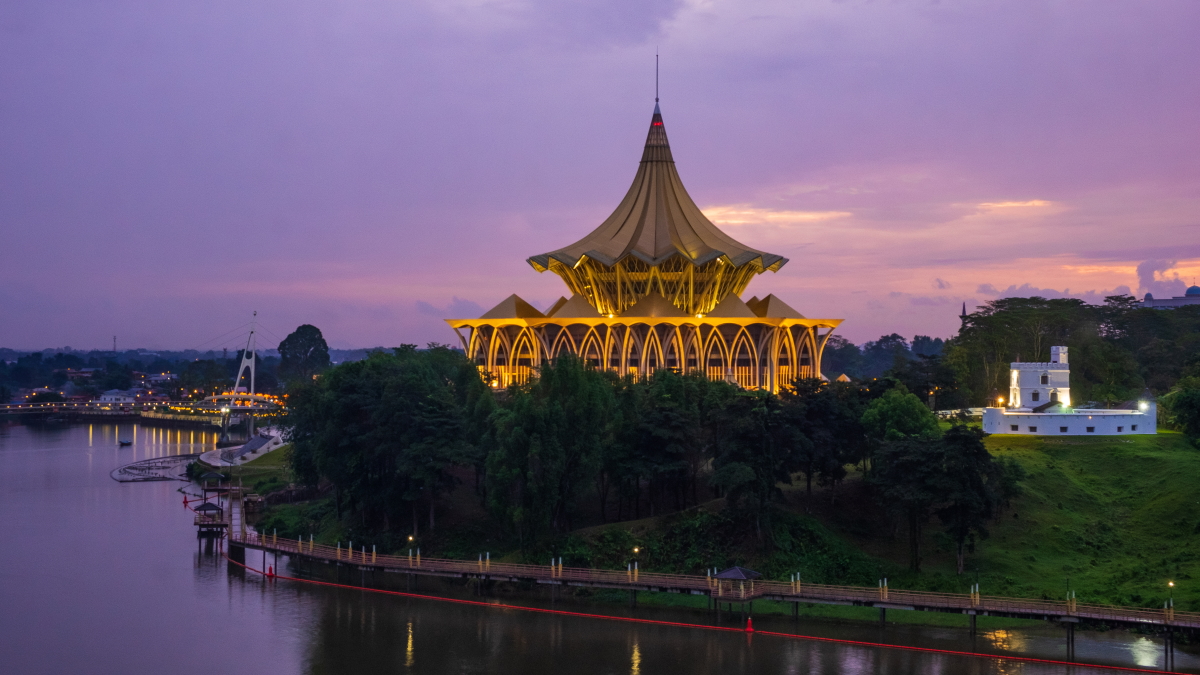 Thanks to its laid-back atmosphere, fast internet, low cost of living and idyllic location between the sea and Borneo rainforest, Kuching is quickly becoming a must-visit destination in the location independent community. In this guide, I provide some background and share local information.

Kuching is the commercial center and largest city of the state of Sarawak on the island of Borneo. Under the direct control of the British for nearly two hundred years, the city is now part of Malaysia. It enjoys year-round warm weather, excellent air quality and is considered the second cleanest city in south east Asia after Singapore. Access by air is easy and cheap thanks to the city’s status as an Air Asia hub. English proficiency is very high, an advantage versus many of the other nomad hubs in the region. Also widely spoken are Chinese and Malay. Kuching’s economy has been growing rapidly over the last decades and its residents enjoy a higher standard of living than in most other Malaysian states. Interestingly, residents from the rest of the country have to apply for a permit before moving to Sarawak.

Getting to Kuching is easy if you are flying in from South East Asia, thanks to a decent number direct flights. Travel times are also reasonable thanks to its central location within the region. If flying long-haul, you will be better off booking flights to a regional hub and separate tickets to Kuching from that regional hub. Kuching is on the same time-zone as China, Singapore, Bali and Western Australia, GMT+8.

The visa situation is fantastic, especially compared to countries like Thailand and Indonesia, as most visitors get 90 days visa-free. There is no hard limit to how many times you can enter in a given year so it is possible, at least in theory, to stay for an extended period of time using visitor entries. The easiest way to visa-run is with a day trip to Brunei, a small country only a few hundred kilometers away. Acquiring long-term residency in Malaysia is also fairly easy and offers interesting tax benefits as Malaysia is a territorial taxation country. With that said, be aware that not all residency options allow for residency in Sarawak.

Food is as cheap and maybe even cheaper than in Chiang Mai. Expect to pay anywhere from 3 to 15 MYR for a local meal and from 10 to 50 MYR for an international meal. The main cuisines are Chinese, Malay, Western and Indian. To learn more about the local cuisine, check out Thanis Lim’s Kuching food guide. Hotels are crazy cheap in Kuching, in fact, it is possible to live at the Hilton or Pullman for less than 1500 USD per month all-in (including the buffet breakfast, gym and lounge if you do a status challenge with Hilton or Accor). International-grade serviced apartments can be had for as low as 500 USD and local apartments for as low as a hundred dollars. If you plan to rent an apartment, I strongly recommend booking a hotel for a few days using a site like Agoda or Booking.com and then visiting the main apartment buildings in person once you are in Kuching. Airbnb can also be an option but long-term it is unlikely to be price competitive. The price difference is usually worth the hassle. Gas is around 2 MYR per liter and it is also possible to buy or rent a motorbike quite cheaply (cars are also cheap, especially the local brands Perodua and Proton). It is absolutely possible to live on 1000 USD per month in Kuching (the figure often used for Chiang Mai) but I would recommend planning double that amount for a more comfortable lifestyle.

The internet in Kuching is pretty good, definitely fast enough to work remotely. LTE and 5G are available from multiple providers and they works well all around town.

Kuching has multiple coworking spaces, the most popular being iCube Innovatioon. It is located in the city center and is unbelievably cheap at only around 30 USD per month. There are also multiple cafes in the city including the usual Starbucks and Coffee Bean and Tea Leaf.

There are many places where you can enjoy live music in Kuching, there are also many restaurants that stay open late. With that said, while a few bars play loud music, there are no real “nightclubs”. There are multiple festivals including the Kuching Food Fair and the world famous Rainforest World Music Festival.

There are cheap public buses connecting most parts of the city although their frequency tends to be poor and I would not recommend relying on them anyway, a scooter is just a better idea. It is possible to walk to most places especially if you live in the center but you will need to be flexible as it often rains and when it rains, it really rains. Overall, Kuching is a well-planned city and traffic jams are not usually a problem. The roads are also very safe and sidewalks are not cluttered like they are in most other Asian cities.

Things do not get much better than in Kuching. On one side of the city you have the Borneo rainforest, one of the three most biologically diverse forests in the world. On the other side, you have the South China Sea and a coastline of beaches (see the photos on this page, taken by me). There are also multiple mountains nearby as well as several national parks. It is possible to see monkeys in the wild and many other rare species. Frankly, I have been all over the world and nothing compares to the Borneo rainforest, it is a magical place.

English is one of the official languages of Sarawak and is present everywhere, even in government. Nearly everyone in Kuching speaks it so communicating with the locals is not an issue. The Malay language uses the Latin script so it is possible to read nearly everything written in it, with some practice. Chinese is also widely used although it is not usually standard Mandarin.

There are several national parks near Kuching, the most famous being Gunung Gading. There are also several caves (including the Sarawak Chamber, the largest cave in the world), villages and mountains within easy reach of the city. I also recommend visiting the Semenggoh Natual reserve and its Orangutan.

You can find more information about Kuching at kuchingborneo.info.

Kuching as the next Chiang Mai

Whether this will happen or not is completely out of my control. With that being said, I think the idea will appeal to many and I am convinced that those who give Kuching a chance will not regret it. Think about it, a city as cheap as Chiang Mai but right next to the sea and the mythical Borneo rainforest. A city where the air is clean and where there are no traffic jams. A city with delicious healthy food. A city with festivals and a live music culture. A city where you can stay for a long time without having to worry about doing visa runs. A city where you can live tax-free, legally, in some cases. A city where sports are a big deal. A city that is multi-cultural and where you will not be treated as an outsider. Sounds pretty good eh?